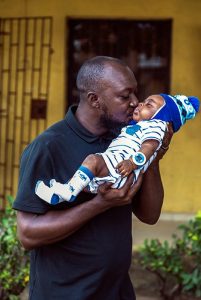 From Erdenet, Mongolia, to Evanston, Illinois, support for dads can be life-changing

Three years ago, Davaanyam Gongorjav, a young father living in Erdenet, Mongolia, found himself in dire straits. His wife had recently died of cancer. He had no job and no child care for his daughters, who were 4 and 7 years old. More fundamentally, he was facing a crisis of confidence as a father.

Davaanyam, it turns out, was not alone. There were dozens of single fathers in Erdenet facing similar challenges in a culture where the notion of a father raising children without a partner was alien, and where community support for those fathers was virtually nonexistent.

Word of these fathers had passed from a professor at the International University of Ulaanbaatar to Jennifer Scott, an Australian Rotarian working in law and mediation. Before long, Scott and a group of colleagues had conducted a community needs assessment and organized a workshop for nearly two dozen single fathers, supported by a global grant from The Rotary Foundation.

“These were men in tragic circumstances, who had lost wives in childbirth or to cancer,” says Scott, a member of the Rotary Club of Central Blue Mountains, who traveled to Mongolia as part of a vocational training team. “They loved their children and wanted to raise them. But they were living in a society where the mother-in-law viewed child rearing as her role and would try to remove them.”

The recent history of Mongolia only compounded their plight. Under Soviet influence, Mongolian men were tasked with herding and farming, Scott notes, while young women were educated. A subsequent mining boom claimed much of the country’s agricultural land, leaving many men without any education or sense of identity. “These men felt, therefore, terribly disempowered,” she says.

The workshop, by all accounts, yielded astonishing results. But Scott and the other facilitators first had to learn a crucial lesson. “On the first day of the fathers’ training, I invited many female social workers to observe,” recalls Enkhtuya Sukhbaatar, a member of the Rotary Club of Ulaanbaatar who helped organize the project. “We wanted to learn from the Australian professionals how to work with these fathers. We didn’t realize that fathers in trouble need male trainers.”

Only after all the women were asked to leave the room were the fathers willing to discuss the hardships they faced. “That made all the difference,” Scott recalls. “The men were finally able to open up about the complexity of parenting, the risk of losing their children while mourning the loss of a wife, and the fact that there was nothing there to support them in the system.”

For men such as Davaanyam, the workshop was life-changing. “I feel very lucky to be part of this project,” the 31-year-old says. “I cannot imagine how I would have managed my life as a father without it.”

Not only did Davaanyam gain confidence in his role as a father but he became a member of a local fathers association. Another dad hired him as a security guard at a vocational school. He’s also been able to secure child care and counseling from local agencies.

“The men were finally able to open up about the complexity of parenting … and the fact that there was nothing there to support them in the system.”

“It was one of those perfect Rotary projects where you go somewhere and are able to truly enable people,” reports Ian Scott, Jennifer’s husband and also a Central Blue Mountains club member, who helped handle administration for the workshop. “Jennifer and her colleagues provided professional and academic support. But it was the locals who really picked it up and ran with it.” The result isn’t just personal empowerment, but systemic change, in the form of greater social and legal support for single fathers in Mongolia.

For Jennifer Scott, the project underscored that while the importance of mothers is universally recognized and supported, the role of fathers is too often overlooked and underserved.

That’s a sentiment that Brian Anderson, half a world away in the United States, will second. About a decade ago, when his first daughter was born, Anderson saw his wife quickly join a slew of support groups for mothers, both in person and online. But when he began looking for fathers groups, he found virtually nothing.

Anderson, a social worker and interfaith counselor in Evanston, Illinois, took it upon himself to launch Fathering Together, which began as “a bunch of dads meeting at a bar every month to talk.” He soon joined forces with a friend who had formed a Facebook group called Dads with Daughters.

That group has grown into one of the largest fathers networks in the world, with more than 125,000 members. “So many dads were asking questions of the group,” Anderson recalls, “and they all really boiled down to this: I want to be a better dad than my dad, but I don’t know how and don’t know where to look.”

Anderson had hit upon the same vacuum of support that Davaanyam struggled with in Mongolia. The question that nagged at Anderson was: why? Why was it so difficult for fathers like him to find community?

After talking to hundreds of fathers informally, Anderson concluded that there are three factors: “First, most of us are still raised in a culture that tells dads you need to be a breadwinner and not much else,” he observes. “Second, we’re given no support when it comes to translating our professional skills into our lives as fathers. And maybe most important, we’re socialized in a way that makes us uncomfortable with emotion.”

As membership in the Facebook group exploded, he launched Fathering Together as a nonprofit. “We want to provide support to dads, but also hold them accountable to who they need to be for their families,” he says.

That accountability holds true for Anderson himself. He recalls a time a year and a half ago when he was tucking his 7-year-old daughter, Clara, into bed. She wouldn’t let him kiss her good night. When he asked what was wrong, she replied, “You know, you run this group for dads, but you’re not being a good dad to me.”