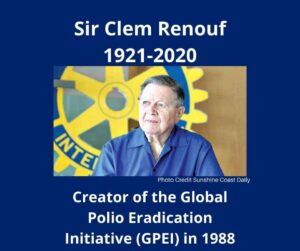 Sir Clem Renouf, the 1978-79 Rotary International president who helped propel Rotary toward its top goal of eradicating polio worldwide, has died at age 99.

Renouf was a member of the Rotary Club of Nambour, Queensland, Australia, for 70 years. He served as RI director, Foundation trustee, district governor, RI committee member and chair, and International Assembly discussion leader.

In early 1979, on a flight home from the Philippines, Renouf read a magazine story about the eradication of smallpox. He wondered if Rotary’s new Health, Hunger and Humanities (3-H) Grants could be used to eliminate another disease. They, for the first time, allowed Rotary projects to be taken on by more than just one club or district.

Renouf consulted with a friend, John Sever, who was a district governor in Maryland, USA, and chief of infectious diseases at the United States National Institutes of Health. Sever happened to be friends with Jonas Salk and Albert Sabin, who developed polio vaccines in the 1950s and 1960s. After doing some research, Sever said that polio would be the best disease for Rotary to work on.
“Clem then set his sights on polio eradication as a Rotary worldwide project,” wrote Ray Klinginsmith, 2010-11 Rotary International president, in a tribute to Renouf. In November 1979, the RI Board agreed to set the eradication of polio as a primary goal of the 3-H program.
Renouf was instrumental in raising funds for the early effort. “In order to raise money, Clem asked all the clubs to contribute some cash, which was about $15 per member, for service projects, and the appeal raised the surprising amount of $7 million,” Klinginsmith wrote. “Part of that money was then used to fund the first polio immunization project in the Philippines … The success was real”
In 1985, Rotary launched the PolioPlus program, and it later spearheaded the Global Polio Eradication Initiative with its partners — national governments, the World Health Organization, U.S. Centres for Disease Control and Prevention, and UNICEF. The GPEI continues to pursue worldwide eradication of polio.

Renouf served in the Royal Australian Air Force during World War II. After the war, he was an accountant and partner in the firm of Renouf and Clarke. He was an associate of the Chartered Institute of Secretaries and Administrators and a fellow of the Australian Society of CPAs, later called CPA Australia. He was also a founder of Sundale Garden Village for the elderly.

Rotary honoured Renouf with the PolioPlus Pioneer Award for his extraordinary service to PolioPlus, as well as the Service Above Self Award, Rotary Foundation Citation for Meritorious Service, and Rotary Foundation Distinguished Service Award. He was a Rotary Foundation Benefactor and Major Donor and a member of the Paul Harris Society and the Bequest Society.

Klinginsmith described Renouf as quiet but a natural leader.

“Clem was always kind and supportive of younger Rotarians, and he is the one who gave me a chance to travel the Rotary Road,” Klinginsmith wrote. “Rotary would not be at the high point it is today without the improvements made by Clem and his team.”