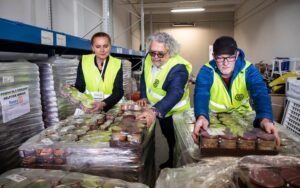 The Rotary Foundation and Rotary clubs around the world have hurried to provide funds, supplies, and services to Ukrainians displaced by the war.

The Rotary Foundation has raised more than $15 million in contributions that are already helping provide people in Ukraine with essential items such as water, food, shelter, medicine, and clothing. Donations made to the Disaster Response Fund after 30 April will be available to all communities around the world that need assistance recovering from disasters.

A family that stands by you

Soon after Russia invaded Ukraine, Iryna Bushmina fled her home in Kyiv and journeyed to Vienna, Austria, staying with Rotary members along the way. Their generosity inspired Bushmina, a member of the Rotaract Club of Kyiv-City, to organize a larger-scale relief effort — and now, she works with Rotaract Europe to find shelter for thousands of refugees through a website called United for Peace.

“I used to just say that Rotary International is a big family. Now I really believe it,” Bushmina says. “And I am convinced that this is a family that will stand by you.”

Olena Bondarenko Hiraishi grew up in the city of Dnipro in eastern Ukraine. Her father is Ukrainian, and her mother is Russian. At the age of 21, she moved to Hiroshima, Japan, where she met her husband, Masashi, a member of the Rotary Club of Hiroshima Southwest. When the war against Ukraine broke out, Satoshi Saginaw, then governor of District 2710, invited her to talk with the Hiroshima Southwest club. Bondarenko Hiraishi connected the Japanese club with Rotary leaders in Ukraine to assist in the relief work.

Her youngest son, who studies the violin, also joined the effort — through music. He and a pianist friend performed at a series of chamber music concerts in the spring, and the proceeds have gone to support Ukrainians.

“I think music is a universal language that can be understood by people from any country,” she says. “My son says he will play it with the utmost prayer for peace.”