Building Peace in a Fractured Land 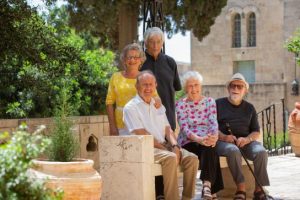 The Rotary Club of Jerusalem focuses on peacebuilding initiatives, including bringing together Jewish and Arab youths to learn about each other’s cultures.

During a meeting of about 50 teenagers in Israel’s western Galilee region, students were grouped in pairs and asked to identify how they were similar and different. Although half of them were Jewish and half were Arab, none of them mentioned that seemingly obvious distinction. When asked why, they told a moderator, “We are all human.”

The meeting, involving students from four schools in Jerusalem and the western Galilee, was part of a peace education program designed and led by Arik Gutler Ofir, a former Rotary Peace Fellow.  It was supported by a 2016 Rotary Foundation global grant and implemented by the Rotary Club of Jerusalem, just one of the club’s many peacebuilding initiatives.

The students stayed at each other’s homes and learned about each other’s food, music, and cultures. The project was so successful that when the grant money ran out, a local education board integrated the initiative — which had been co-sponsored by the Rotary Club of Mönchengladbach, Germany, and supported by Rotary clubs and districts in Australia, Germany, and the United States — into the civics curriculum.

“When you bring children from both sides to get to know each other, you create a situation where the other is not an enemy,” says Dan Shanit, a former medical clinician, researcher, and program developer who has served as the Jerusalem club’s president twice, most recently in 2021-22. “Enemies are anonymous. They don’t have a face. What you want is to know the face.”

Since its beginning, the Rotary Club of Jerusalem has focused on peace. The club was chartered in 1929 during a period when the region, including the future state of Israel and what would become the occupied Palestinian territories in Gaza and the West Bank, was under British colonial rule. Most of the charter members were from the city’s British elite. Today, the club continues to hold meetings in English.

Read more on Building Peace in a Fractured Land