Rotary Projects Around the Globe – September 2022 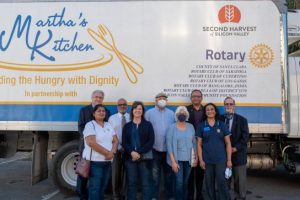 While Silicon Valley is among the world’s most affluent locales, hunger and income disparities strain food distribution programs in the area. For the past two years, the Rotary Club of Saratoga, California, has been a continuing presence at Martha’s Kitchen, a soup kitchen in San Jose, where members prepare food once a month. The club coordinated the $95,000 purchase of a refrigerated box truck so the facility could collect perishables and goods donated by organizations such as the Second Harvest of Silicon Valley, a food bank that covered half the truck’s cost. “The soup kitchen itself does not have extensive storage facilities. The truck helps so food doesn’t spoil,” says Sangita Seshadri, immediate past president of the club. With $3,000 contributed by the Rotary Club of Bangalore West, India, the project shows the power of international friendships. “Typically, people look at the developed countries giving to the developing countries,” Seshadri says. “There is need all over, and when we talk about partnerships, it is both ways.”

A year after some of its members participated in their municipality’s inaugural road rally, the Rotary Club of Campo Novo do Parecis ventured into a bigger role as a principal driver of the event. The Travessia do Parecis, held in April, followed a roughly 120-mile route in the west-central state of Mato Grosso, with 87 vehicles and 261 motorists participating.

“The setting for the event is full of natural beauty — spectacular waterfalls, rivers with crystal clear waters — and indigenous culture,” says Adriano Paz, a club member and organizer who, with his wife, Heloisa, finished second at the intermediate level. About 35 of the club’s 44 members handled food and beverage chores to help the club raise more than $4,200.

Read more about Rotary Projects Around the Globe including Sri Lanka, France, Italy

Previous ArticleLessons in fatherhood
Next ArticleBuilding Peace in a Fractured Land