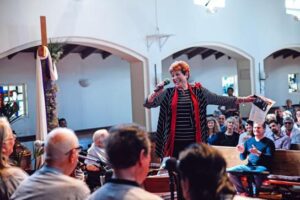 Carol Rosenstein was watching her husband, Irwin, slip away inch by inch.

At one time he had been a brilliant lawyer, a lover of Broadway musicals, a world traveler. But after his diagnosis of Parkinson’s disease in 2006, he developed dementia, and slowly everything changed. His gait flattened to a shuffle. The sparkle in his eyes turned into a blank stare. His mood soured. Worsening matters, the medications he took caused hallucinations and extreme agitation. As communication grew more challenging, Carol felt the distance between them growing.

Then, in 2014, something happened. Irwin, who had been a gifted pianist since childhood, sat down at the piano and began to play.  As his fingers floated through American classics like “Fly Me to the Moon,” “What a Wonderful World,” and “Try to Remember,” Carol saw his posture straighten. The sparkle returned to his eyes. The husband she once knew came back, bit by bit, if only briefly. “I could see this human being resurrect and start to reconnect with his environment,” she says, “just like I had given him a dose of medication.”

Mystified, she called his neurologist and asked what was happening. “He said, ‘Carol, you are watching the power of music, changing brain chemistry.’”

That statement would go on to change not only their lives but the lives of countless others.

Music, it turns out, is medicine for the mind.

Previous ArticleRotary projects around the globe – May 2022
Next ArticleImagine Rotary – Jennifer Jones, Rotary’s first female president, is eager to advance the narrative