Rotary projects around the globe – May 2022 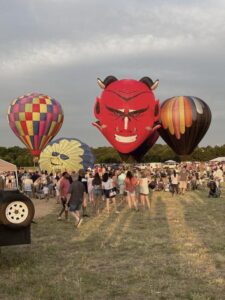 Learn how Rotary clubs are taking action in Belize, Italy, Rwanda, the Philippines, and the United States.

The Rotary Club of Collierville, Tennessee, treated hundreds of children with special needs and their families to a complimentary evening of hot-air balloon rides, food, and activities. The event, held on the eve of the Bluff City Balloon Jamboree, had 80 helpers across seven clubs in District 6800 (Tennessee and Mississippi). The clubs generated $30,000 in donations to cover the expense. “This was a once-in-a-lifetime event for a special-needs child,” says Dave Rhylander, a member of the Collierville club. “Just how many children in general have been on a tethered balloon ride? Roughly 300 kids got an opportunity to do that.” For September, the club is planning a riff on a TV show about high school football as another event for children with special needs. “We’re having our own Friday Night Lights for them this year,” Rhylander says.

In 1991, a year after the Rotary Club of Three Rivers, Michigan, signed on to the District 6360 “Belizerve” project, member Larry Campbell packed his bags for his first trip to a foreign country. He delivered books to a primary school in Libertad, in northern Belize on the Yucatán Peninsula. The years passed, and Campbell kept returning, participating in projects that supplied communities with used school buses, ambulances, and trucks, as well as medical equipment. In 1995 the club raised $20,000 for a five-room schoolhouse, built with the assistance of several Rotarians; by the end of the decade, a British charity had added a second floor, doubling the space which currently serves about 100 students. By mid-2021 the club, with donations from a Three Rivers church and private individuals, had given the school $132,000, much of it to pay high school tuition for graduates. “Many students with scholarships have done well: one doctor, three teachers, one banker, a store manager, just to name a few,” says Campbell.