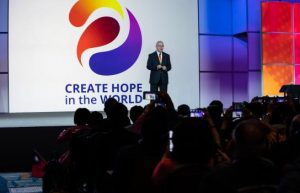 Rotary International President-elect R. Gordon R. McInally called for members to capture the world’s attention and lead the way toward possibilities far beyond our current expectations.

McInally, a member of the Rotary Club of South Queensferry, West Lothian, Scotland, revealed the 2023-24 presidential theme, Create Hope in the World, during the Rotary International Assembly in Orlando, Florida, USA, on 9 January. He urged members to promote peace in troubled nations, help those affected by conflict, and maintain the momentum of initiatives begun by past leaders.

Watch the the address

“The goal is to restore hope — to help the world heal from destructive conflicts and, in turn, to help us achieve lasting change for ourselves,” McInally said at Rotary’s annual training event for incoming district governors.

McInally spoke about a woman he met in Ban Taling Chan, Thailand, where Rotary members helped build houses, a meeting hall, and childcare and health care facilities following the tsunami that devastated South Asia in late 2004. The woman had lost her husband, her daughter, and her son in the tsunami, as well as her livelihood. But she still had a gift to offer McInally: a beautiful seashell.

“She went on to tell me that Rotary… had restored her optimism. We gave her hope,” McInally said.

“This is how Rotary brings lasting change to the world,” he added, “one restored or newly created hope at a time.”

A significant way to bring hope to the world is to put a greater emphasis on peace, McInally said. He cited the action Rotary members have taken in the past year to support the people of Ukraine after the invasion by Russia. Rotary has made humanitarian relief a priority, attracting more Ukrainian members in the process. But McInally noted that true relief won’t come without peace — not just in Ukraine, but in Yemen, Afghanistan, Syria, and dozens of other places around the globe.

“Peace is the soil where hope takes root,” McInally said.

McInally also emphasized the power of continuity, calling for Rotary members to continue the work of some past leaders. He pledged to maintain the Empowering Girls initiative launched by 2021-22 President Shekhar Mehta and uphold the emphasis on diversity, equity, and inclusion throughout Rotary. He also noted recent events that underscore the importance of Rotary’s continuing focus on polio. In the past year, polio cases have emerged in many areas around the world, making it more crucial than ever for Rotary members to lead the fight against the disease.

To do that, McInally said, Rotary must continue to raise at least US$50 million each year to receive the full 2-to-1 funding match from the Bill & Melinda Gates Foundation. Only about 1 in 12 members currently gives to the polio eradication campaign, with fewer than 1 in 5 clubs donating each year.

McInally asked the district governors-elect for support creating a new sense of urgency in their clubs to help realize Rotary’s vision of a polio-free world. “This is the time for us to go beyond what’s necessary year to year and make sure we provide every resource necessary to succeed as quickly as possible,” he added.

In addition, McInally said, Rotary members should offer hope to those affected by mental health challenges — a crisis exacerbated by the COVID-19 pandemic. Many people have lost family members, many more have found their social networks uprooted, and young people especially have had their educational and developmental paths interrupted. As a result, more people around the world are facing mental health issues. And yet, seeking assistance is often perceived as a sign of weakness.

“Nothing could be further from the truth,” McInally said. “Reaching out for help is courageous — and continuing on a path toward wellness is even more so.”

He added that Rotary will work to improve mental health services in the next year and beyond. Rotary should be known as an organization that takes care of its members as well as the people it serves, McInally said. “Any mental health professional will tell you that by helping others, we essentially help ourselves.”

McInally ended his speech by describing his ideal balance of continuity and innovation. “Rotary helps create the conditions for peace, opportunity, and a future worth living,” he said. “By continuing what we do best, by remaining open and willing to change, and by keeping our focus on building peace in the world and within ourselves, Rotary helps create a more peaceful world — a more hopeful world.”