Why eradicating polio is so important 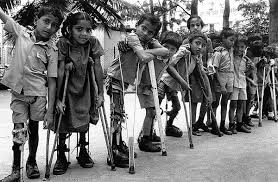 The recent detections of polio in Israel, the U.K., and, most recently, New York, USA, underscore the importance of Rotary’s efforts to eradicate polio. As long as the polio virus exists anywhere, it remains a threat to children and adults everywhere. Learn what Rotary and our partners in the Global Polio Eradication Initiative are doing to elevate awareness of the importance of vaccinations and protect children from this disease.

The detection of poliovirus, and even cases of polio, in places where it hasn’t been found for years has demonstrated once again that eradicating a human disease isn’t easy, especially in the final stages.

In recent months, an unvaccinated man in the United States was paralyzed. In the UK, poliovirus was detected in sewage. In Malawi, a child contracted polio. And Mozambique announced its first polio outbreak in 30 years.

But rather than be discouraged, Rotary and its partners in the Global Polio Eradication Initiative (GPEI) remain confident that they are making progress and can achieve their goal of a polio-free world. There are several reasons for this optimism.

A new oral vaccine, which has a substantially lower risk of causing vaccine-derived variant polio, is now available. This makes it less likely that the weakened strain of poliovirus that is used in the vaccine will mutate and spur outbreaks in communities where immunization levels are low, which has occurred in Africa, Asia, and the Middle East.

Moreover, the number of cases of the disease caused by the wild virus has been at historically low levels in Pakistan and Afghanistan, the two countries where poliovirus transmission has never been stopped. This presents an opportunity to seize the moment and stop the wild virus forever.

Rotary’s perseverance has played an enormous role in bringing the world to this point. It’s that commitment, coupled with the determination of the other GPEI partners, that is needed to complete the job.

“This year has shown us why we must stay the course on polio eradication,” said Mike McGovern, chair of Rotary’s PolioPlus Committee. “We have an opportunity to make history and need Rotarians to redouble their commitment by raising funds and awareness.”

Rotary members have been at the center of the worldwide effort to eradicate polio for more than three decades. Rotary launched PolioPlus in 1985 and helped found the GPEI in 1988, with the goal of eradicating a human disease for only the second time in history. (The World Health Organization declared the world free of smallpox in 1980.) When the GPEI was founded, wild poliovirus paralyzed hundreds of children every day, with an estimated 350,000 polio cases across more than 125 countries in one year. Since then, cases have plummeted more than 99.9%, sparing more than 20 million people from paralysis.

Through a funding partnership with the Bill & Melinda Gates Foundation, Rotary commits US$150 million to fighting polio every year. Rotary members have contributed more than US$2.6 billion and countless volunteer hours to this effort. With the GPEI partners, members engage with communities everywhere to encourage high vaccination rates and help immunize more than 400 million children annually.

As the world gets closer to having zero polio cases that are caused by the wild virus, public health experts say it is more important to track all forms of the virus, wherever they may appear, including in polio-free regions.

They also say that the re-emergence of polio in these places highlights the importance of vaccination as the only form of protection against polio and many other diseases. It draws attention to the work needed to encourage people to get vaccinated at a time when vaccination rates are dropping in some communities. And it reinforces the fact that polio anywhere is a threat everywhere, which underscores the importance of the End Polio Now campaign.

As World Polio Day on 24 October approaches, Rotary urges its members to tell their communities about the importance of vaccination. Global donors and national governments are also expected to announce new pledges to fund the GPEI’s 2022-26 polio eradication strategy. This strategy focuses on greater accountability from national governments about their work to eradicate wild polio and end outbreaks of polio caused by variant poliovirus.

With these kinds of sustained political and financial commitments, the world is still on the path toward an incredible accomplishment: making sure no person is paralyzed by polio ever again.