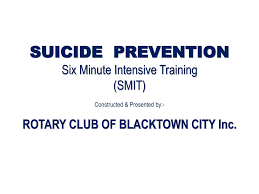 As a Former NSW Police Rescue Suicide Crisis Negotiator for ten years, he specialised in retrieving people threatening to jump from a height and retrieved over 200 people.

Reasons for developing the Suicide Prevention SMIT Suicide in Australia 2020 In 2020 – 223 Aboriginal and Torres Strait Islanders suicided Around 65,000 people attempt suicide every year in Australia

Suicide Prevention SMIT Plan & Purpose Most community or work groups cannot afford their staff to attend a half day, full day or longer workshops on Suicide Prevention. Most are time poor, short staffed and financially strained.